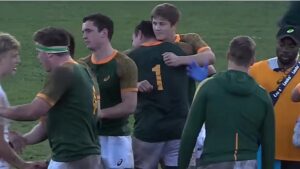 Sydney (AFP) – South Africa made the changes on Tuesday in pursuit of a much-needed win over Australia, with eight new players selected for its starting lineup, partly due to injuries.

The Springboks head into the game on Saturday in Sydney after two straight defeats, losing 35-23 to the All Blacks at home before falling 25-17 to the Wallabies in Adelaide.

The world champions are left at the tail end of a four-team rugby league with three matches to play and in dire need of victory to keep their hopes alive.

“We chose a team that we thought would be the best for this match because we have so many players with injuries and we focus on how we want to play,” said coach Jack Nynaber, whose side have been unbeaten on Australian soil since 2013. .

“We let ourselves down in the last two games and we are determined to correct that this week and change our fortunes in Australia. We will prepare as much as possible this week to stay in the title hunt.”

Four of the changes were carried out with Handre Pollard, Lukhanyo Am and Pieter-Steph du Toit due to knee problems, while Elton Jantjies injured his hand.

This means Damien Willemsey will go from linebacker to flyhalf, slots Jesse Kriel in the center and Franco Mostert included in the loose trio.

Talented young full-back Canan Moody will make his Springbok debut on the right wing in a switch position with Warrick Gillant, who moves to the bench.

Experienced Willy Le Roux takes Willems’ place at full-back in his 77th Test, with the other defensive line changing in the scrumhalf, with Jaden Hendrikse replacing Fav de Klerk who was removed from the 23rd position.

Cobus Reinach is the scrumhalf variant while experienced Frans Steyn offers options in flyhalf and center.