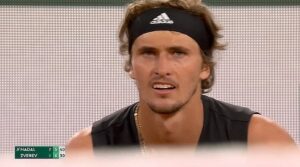 Alexander Zverev tore his ankle ligaments during the French Open semi-final against Rafael Nadal in June.

SEOUL (AFP) – Alexander Zverev was named top of the title and first place list on Wednesday at the Korea Open in September, as the world number two will return to the ATP tour after a serious ankle injury.

The 25-year-old is not at the US Open, which is currently being played in New York, but has been named to the German squad for the group stage of the Davis Cup Finals, which comes a week before Seoul.

Organizers said the Tokyo Olympics gold medalist will be one of the top three players in the event, which will take place from September 24 to October 2, alongside Norway’s Casper Rudd and Britain’s Cameron Nouri.

Zverev, who won 19 singles titles but has yet to win majors, has not played since tore an ankle ligament during his semi-final match against Rafael Nadal at the French Open in June.

He left the pitch at Roland Garros in a wheelchair and subsequently underwent surgery to repair three torn ligaments in his right ankle.

The ATP Tour returns to Seoul for the first time since 1996.

The Korea Open is one of six one-year events in 2022 announced to replace tournaments in China that were canceled due to Covid restrictions. Others take place in the United States, Italy and Spain.

World Cup: “It would be nice to see Messi lift the...

Salah scores the fastest hat-trick in the Champions League in Liverpool’s...