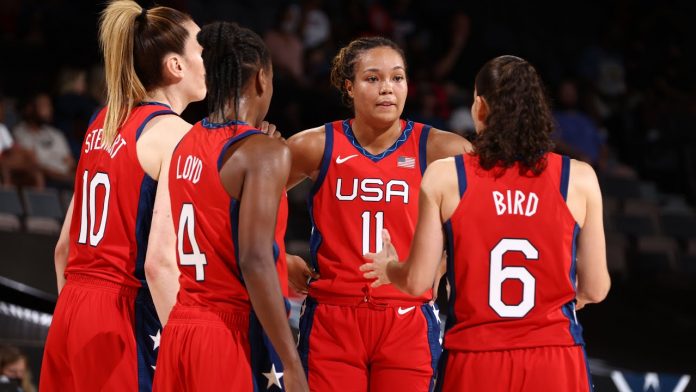 SYDNEY (AFP) – Olympic champions United States of America head into the Women’s World Cup on Thursday with a fresh-faced team losing some of their biggest stars, but even without Britney Grenier and Sue Bird, the basketball powerhouse is the favorites to win a fourth consecutive title.

Greiner, one of the stars of their Tokyo Olympic-winning team, continues to languish in a Russian prison while Bird and teammate Diana Taurasi retire.

Brianna Stewart, Joel Lloyd, Kahlia Cooper and Ariel Atkins are among the Tokyo Olympians to return in red, white and blue at the 12-team tournament in Sydney.

With a wealth of talent, several promising youngsters are knocking on the door, including Collegiate Player of the Year Aliyah Boston and WNBA Rookie of the Year Ryan Howard.

“It just shows that women’s basketball is in good hands,” said Nalissa Smith, a member of the Indiana Fever. “The future is strong for us. We will learn.”

“We’re definitely younger, but the way we want to play, we want to push the pace and respect the coach and NBA by playing the game the right way,” added Atkins, the Washington Mystics shooting guard.

The United States, which has won 22 consecutive matches in the competition, faces Belgium and China in the group stage, avoiding the third world ranked and hosts Australia.

Australia, which reached the 2018 World Cup finals, is one of only two teams other than the United States or the former Soviet Union to win the World Cup, and they have a much more difficult task in Group B.

The draw was signed with Japan, the Asian champion, France, the bronze medalist in the Tokyo Olympics, Canada, which ranked sixth, Serbia and Mali.

Spain, ranked second in the world, failed to qualify.

The top four teams from each group advance to the quarter-finals before capping the 10-day tournament on October 1, with the winner securing a coveted spot at the 2024 Paris Olympics.

The Americans open to Belgium with the plight of Grenier, who was arrested at Moscow airport in February for possession of vape cartridges with a small amount of cannabis oil, casting a shadow over the heroism.

The 31-year-old, who was in Russia to play for professional Yekaterinburg during the downturn with Phoenix Mercury, was charged with drug smuggling and sentenced to nine years in a penal colony.

Russia does not have a team in Sydney after being disqualified from the tournament after the invasion of Ukraine.

Lauren Jackson has returned to Australia at the age of 41

Australia’s Opals also began their campaign on Thursday, against the European juggernaut France, with Lauren Jackson returning to the 12-player roster having notably returned from her retirement years to be selected at the age of 41.

“It’s been a very big ride, an intense one,” said Jackson, a four-time Olympic and seven-time WNBA medalist who first played with the opals 25 years ago.

“Girls feel good and it’s a really exciting time, but it’s a nervous time for me.”

Now, the mother, Australia’s greatest player of 2016 has retired with a knee injury before making a comeback in April to reach the World Cup for the fifth time.

Ramo Tokashiki, Stephanie Mauli and Maki Takada hold the key to challenging Japan on the podium once again from behind its Olympic silver medal while Chicago Sky star Emma Messiman will be crucial for Belgium.

She predicted that Belgium would play a “beautiful” brand in basketball as they looked to improve their fourth position in 2018.

“I know the team has had good preparations, and they are ready mentally and physically,” she said.

Snowflake - September 6, 2022 0
The red and black striker completed 200 matches for Flamengo and scored his 100th goal for the Brazilians Sunday was historic for Gabigol! In the...

World Cup 2022: in a deafening atmosphere, Saudi Arabia creates the...

Lewandowski leads Barcelona to victory over Sevilla with Real Madrid in...