No captain will ultimately wear a rainbow armband at the World Cup. Eager not to offend the organizing country, Fifa has indeed banned the LGBT armband that several captains of European selections wanted to wear. Hugo Lloris was not one of them. If it had been discussed in recent weeks, the tricolor captain had indicated at his first press conference in Clarefontaine last week that he would not wear the said armband. 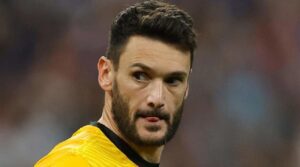 The Nicois has announced that he will not wear the LGBT colors armband mentioned in recent weeks.

On the subject, I have my personal opinion and it joins that of the president. In France, when we welcome foreigners, we want them to follow our rules, our culture.

And I will do the same in Qatar. I can agree or disagree with their ideas, but I have to show respect”, he had justified. Words that had sparked a real controversy.

And the latter could resume in view of the recent revelations of Freeze Frames. According to Yoann Lemaire, former footballer and president of the association for the fight against homophobia Foot ensemble, who had interviewed three players from the France team, the French Football Federation has indeed taken care not to broadcast a clip against homophobia in football shot last March and which was to be broadcast on the occasion of the World Cup. The fault in particular with the words of the former Nice on the subject.

According to the doorman of the Blues, homophobic insults in football are not a problem. “It’s folklore, football, it’s part of the decor, the fans who sleep in… If need be, we can use it as additional motivation,” he explained. What provoke the indignation of Yoann Lemaire. “We had only three players who showed up for the clip: Jonathan Clauss, Jules Kounde, who was extraordinary, and Hugo Lloris, who already had surreal positions, he recently confided in the columns of Ouest-France. The others did not speak. So the clip fell through, even if some people

“Noel Le Graet let me down several times. It’s a shame, beyond everything that has already come out in the press about him. As soon as he speaks, it’s distressing. I don’t want to deal with him anymore”, he also regretted, adding when to the position of the FFF and the captain of the Blues: “It’s a shame for France and football. It’s even a humiliation.”

World Cup 2022: an uninhibited Tunisia, a Denmark without an idea … What to...