While Kylian Mbappé still wants to leave PSG and could decide his future in Qatar, Real Madrid are said to be keeping in touch with him. 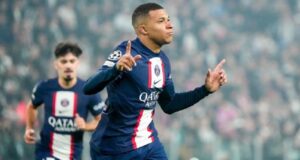 While Kylian Mbappe still wants to leave PSG and could decide his future in Qatar, Real Madrid are said to be keeping in touch with him.

Last October, it was announced that Kylian Mbappe, who this summer extended his contract for two more seasons with Paris Saint-Germain, would like to leave the capital club in the coming months. So since then, a vagueness surrounds the future of the French striker,

According to information from the Spanish daily Sport, the native of Bondy would like to leave PSG and could decide his future at the World Cup in Qatar. Real Madrid, who have long believed they could freely sign the former Monegasque this summer, would still watch all this from afar but merengue president Florentino Perez would still remain in contact with Kylian Mbappe and his entourage.