Not in the best of moods when entering the World Cup on Tuesday against Australia, the France team has many areas to work on to hope to retain its title. 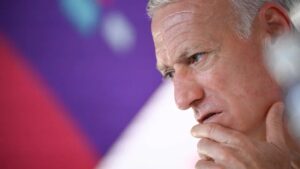 Didier Deschamps at a press conference in Doha, November 21, 2022, on the eve of the entry into the running of the French team in the World Cup. (AFP)

Holders of the title, the France team is one of the favorites for the final victory when starting the 2022 World Cup in Qatar.

Despite the absence of several executives, the objective of the Blues – to reach the last four – has not been revised downwards, as Didier Deschamps clarified at a press conference on Sunday. But to achieve the feat of retaining their title, which only Italy and Brazil have managed to do in history, the Blues will have to overcome four major challenges in this competition and from their first match against Australia on Tuesday. November 22 at the Al-Janoub stadium.

Whether before or since the start of the rally, the news of the France team is vampirized by the injuries and convalescences of its players. Once the packages of N’Golo Kante, Paul Pogba and Mike Maignan were recorded, three other internationals had to leave the group of 26 selected by Didier Deschamps: Presnel Kimpembe, Christopher Nkunku, then the Ballon d’Or Karim Benzema. By dint of “hard knocks”, according to the expression chosen by all the Blues questioned about these absences, fear took over.

Each grimace after a precarious support, each contact a little too rough arouses concern. If the absence of Eduardo Camavinga from the penultimate training session before Australia was a non-event for the staff of the Blues, Didier Deschamps had to insist in a press conference on Monday to put out a potential new start. fire: “It can happen that a player does not do a session, or even two. I have always considered that if there is a small problem, [better] not to do the session rather than being less well the next day. There is no concern”.

For Ibrahima Konaté, it is important not to “look back”. For the Blues, it will be necessary to make the most of the forces present, while taking great care. The success or otherwise of the management of the case of Raphaël Varane will be decisive. Didier Deschamps assured that the latter was “suitable and available”, but a doubt still remains as to his tenure. If he is a pillar of the selection, a hasty return could have disastrous consequences.

With the absence of the two great craftsmen of the coronation in Russia in 2018, Paul Pogba and N’Golo Kante, the French team must enter the competition with inexperienced midfielders. Whether Adrien Rabiot, Aurelien Tchouameni, Youssouf Fofana, Eduardo Camavinga, Jordan Veretout or Matteo Guendouzi, none of these players had ever played in a World Cup. Apart from the Fofana-Tchouameni association, which made the heyday of AS Monaco, no other combination has already proven itself in selection, or even simply been tested.

When his list was announced, Didier Deschamps was asked if he believed he could become world champion with such inexperienced midfielders. “I don’t have the answer, no one can have it, he conceded. I trust them, they potentially have what it takes.” “You are right to ask yourself these questions,” admitted Fofana later, in Doha, which does not prevent him from being optimistic: “There are two major players absent, but when they started, they didn’t have experience. There’s a beginning to everything. Maybe in eight or nine years, you’ll be happy to see me.”

“I’m not a leader who talks a lot in the dressing room. I’m more of a leader in actions on the pitch.” Before these statements by Antoine Griezmann on the Telefoot set on Sunday, Lucas Hernandez and Adrien Rabiot had made the same remarks at a press conference in Doha. In the absence of Kimpembe, Benzema but also and above all Paul Pogba, the French team is looking for new leaders for this World Cup.

At a press conference on Monday, Didier Deschamps wanted to be reassuring: “There are executives who are there and who have this ability to express themselves. There are still enough players capable of stimulating the locker room. We have this that need.” Next to a Hugo Lloris captain but rather discreet, Raphaël Varane could take over from Pogba. Veteran Steve Mandanda (37), goalkeeper number 2, can also make his voice heard.

Just like Olivier Giroud, who clarified at the start of the week: “I too will have my role as big brother, to speak when necessary”. Kylian Mbappe is seen more as a technical leader. “Responsibility, Kylian does not have more internally [compared to 2018]. But his ability to make a difference, we will need it,” explained Deschamps. Already important since his arrival in selection a year ago, Tchouameni could also take up more and more space.

Facilitate the integration of novices

Not everyone is as comfortable as Tchouameni. Among the 25 players of the France team, 15 will play for the first time in the World Cup. Twelve have less than ten selections. All these inexperienced players, some of whom could have an important role to play during the competition, will have to manage the pressure inherent in such an event. “All the means are put in place so that the players feel at their best”, explained Axel Disasi, called at the start of the rally to replace Kimpembe.

He, like others, was well received by the oldest, who will do their best to guide them. “We need the right words to launch a good dynamic. They have the talent, they evolve in the biggest European clubs and I feel them serene”, observed Hugo Lloris. “If we responded present, it is because we feel capable of carrying this team”, for his part assured Youssouf Fofana.