The two teams that share Group D of the World Cup in Qatar, alongside France and Australia, drew their entry into the competition on Tuesday (0-0). 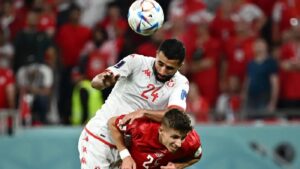 Before France entered the fray against Australia, their future opponents were revealed on Tuesday 22 November. Denmark and Tunisia battled, but failed to decide on the lawn of the Education City Stadium (0-0).

Favourites, the Danes can consider themselves lucky not to have started the competition with a defeat, as their opponents in the evening caused them problems. But, they could very well have tipped the game in the right direction in the last 20 minutes.

Expect the name of each player from the France team to be heavily whistled on Saturday. The Tunisian people made the trip in large numbers to Doha. They are also the most visible in town since fans flock to the Qatari capital. Uninhibited, carried by stands won over to their cause, the Tunisians took the semi-finalists of the last Euro by the throat. An overflowing desire allowed them to win most duels and second balls. It has happened on several occasions to see two teammates throwing themselves at the same aerial ball.

After a minute of play, the first tackle from Aissa Laidouni, who celebrates each defensive action as a goal, on Christian Eriksen set the tone. Something to satisfy his supporters. Omnipresent, inhabited, the environment of Ferencvaros alone gave a particular flavor to the match. We will have to be wary of this Tunisia which is very hungry and which surely has not digested having narrowly missed qualifying for the round of 16 in 2018.

Denmark is struggling to create…

Already beaten in terms of engagement, Kasper Hjulmand’s players had great difficulty building a fluid, efficient and even less creative game. They locked themselves in stereotyped patterns, with approximate combinations on the right side, relying on the paw of Christian Eriksen. As against France, during their victory on September 25 (2-0), intensive use of the same sector was observed on set pieces, with the systematic search for a deviation at the far post.

For the rest, it was for 70 minutes: only three shots attempted, no successful dribble until this moment of the match. The coach had to revise his plans twice to finally get something from his team. The entry of Mikkel Damsgaard just before the break, in place of Tom Delaney, touched, resulted in a slight improvement. Above all, the triple change and modification of the device in the 65th minute (from 5-3-2 to 4-2-3-1) woke up a team that had been lethargic until then.

But knows how to suffer

If the recent semi-finalist of the Euro disappointed on Tuesday, he will have had the merit of both avoiding defeat and not conceding a single goal, at the end of a meeting which he largely suffered. At the end, Kasper Schmeichel will have spent a rather quiet evening. Apart from his exceptional intervention on the dive of Issam Jebali (43rd), the experienced Danish goalkeeper had no other save to make.

In the first period, despite the Tunisian enthusiasm, Denmark deliberately broke the rhythm by taking all their time in the recovery. He finished the game with 61% possession and more expected goals than his opponent (1.4 to 1 according to this statistic which analyzes the total danger of shots). Above all, the biggest opportunity of the match is to his credit, when Cornelius sent his diving header on the post of Aymen Dahmen (70th).