The Saudis, led at half-time, overturned the match on the return from the locker room against Lionel Messi’s Argentinians before winning after an interminable match. 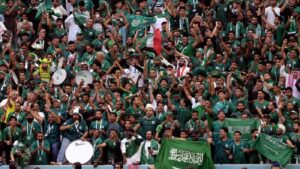 Saudi fans during the World Cup match between Argentina and Saudi Arabia at the Lusail stadium in Doha on November 22, 2022. (AFP)

We knew the 2022 World Cup had started, but all that was missing was a crazy match in an atmosphere worthy of the name for it to be there definitively.

On the third day of the World Cup in Qatar, the Lusail stadium, which will host the final of the competition on December 18, was the scene of a match full of twists and turns. Which ended, Tuesday, November 22, with the first huge surprise of this World Cup, with the success of Saudi Arabia against Argentina (2-1).

Led at the break after Lionel Messi’s first goal from the penalty spot at the start of the match (9th), the Saudis overturned the table after returning from the locker room, with two goals in quick succession from Saleh Al-Shehri (48th) and Salem Al -Dawsari (53rd). Two goals scored in front of the Saudi stands, who exploded with joy before screaming their pride on each defensive return, each intervention and each offensive action.

The Argentinians, groggy, did not know how to answer. Their first period had however been interesting, but the high defensive line of the Saudis hampered them and Messi (22nd) then Lautaro Martinez twice (27th, 35th) saw the offside flag raised on their goal. The Albiceleste mainly fell on a great Mohammed Al-Owais, the Saudi goalkeeper, decisive ahead of Messi (2nd), Nicolas Tagliafico (63rd), Angel Di Maria (72nd) and Lautaro Martinez (74th).

This result will obviously be disappointed among the Argentinian supporters, who came in large numbers to Doha. Along with Mexicans, Tunisians and even Saudis, Albiceleste fans have been among the most vocal for several days in the streets of the Qatari capital. In the red line of the metro which leads to the Lusail stadium, before the meeting, the Argentines sang “Meeeessi” for a long time.

La Pulga, which announced yesterday that it is playing its very last World Cup, sees its team entering the competition very badly. At the end of the first period, everything seemed to be going well for the Albiceleste, who is one of the favorite selections for the final victory in this World Cup. After this defeat, the first of the South American selection for three years and 36 games in a row, Argentina will have to recover in their second match against Mexico.

For their part, the Saudi fans suffered in the last moments of a match which once again dragged on with nearly fifteen minutes of additional time. The French coach of Saudi Arabia, Hervé Renard, has continued to inveigh against the referees to demand the final whistle. The latter finally released the Saudi players, who came to greet their supporters. These same supporters will be able to continue to parade proudly in the streets of Doha in the coming days, after the greatest victory of Saudi football in its history.

Athletics: silver at the Beijing Games, European record, disqualification and revenge in 2014… The...