Qualified for the quarter-finals after their success against the United States on Saturday (3-1), the Netherlands are gradually asserting themselves as a coherent selection, whose ambition is to seek their first world title. 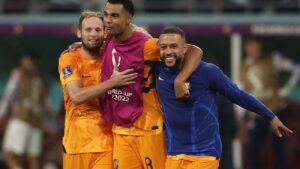 Daley Blind, Cody Gakpo and Memphis Depay celebrate the qualification of the Netherlands in the quarter-finals of the World Cup, December 3, 2022. (AFP)

The revving up is smooth, but the Netherlands are not lacking in ambition. Louis van Gaal’s team qualified for the quarter-finals of the World Cup on

Saturday, December 3, beating (3-1) the United States at Khalifa International Stadium in Doha. All with the impression of a rehearsed collective, capable of standing up to and annoying all the selections involved in the competition.

Undefeated since the start of this World Cup, the Netherlands confirm their status as an outsider not to be overlooked. After failures in the last three major international competitions – absence from Euro 2016 and the 2018 World Cup, then elimination in the round of 16 of Euro 2021 against the Czech Republic – we would have almost forgotten them. But it was a revanchist Dutch selection that showed up in Qatar. “We believe in ourselves, we progress with each game. We will fight until the end”, launched an ambitious Cody Gakpo after the match against the United States.

The key to the success of the Netherlands currently lies in a coherent game plan and quality at each line. First in this three-man hinge, made up of some of the best defenders on the continent. Against the United States, Virgil van Dijk, Jurrien Timber and Nathan Aké were lined up from the start, giving off an impression of serenity from the stands. With Matthijs de Ligt and Stefan de Vrij on the bench, the Dutch have plenty to see coming in this sector.

The return of Depay, a godsend

Annoyed by Senegal (2-0) and Ecuador (1-1) during the group stage then by the Americans at the start and end of the match on Saturday, Van Gaal’s selection has so far not conceded only two goals and knows how to suffer. In the middle, the air of Doha did not seem to displease Frenkie de Jong, a formidable engine. We also found the Denzel Dumfries of the Euros, who delivered two assists and scored a goal against the United States.

Gakpo is, in attack, one of the revelations of the start of the tournament and sits at the top of the scorer rankings (three achievements) alongside Kylian Mbappe in particular. The rise of Memphis Depay, who is coming back from injury and was a scorer on Saturday, will undoubtedly bring a real plus for the rest of the competition. The substitutes also seem very involved, as evidenced by these scenes of joy on each goal or at the very end of the match, in the middle of the lawn, to celebrate qualification.

All these beautiful people are led with an iron fist by Louis van Gaal. Cured of cancer last April, the 71-year-old coach continues to face criticism in the country. His team is not attractive enough to watch, according to some Dutch media. Against the United States, she had no possession over the whole match (41% against 59% for the Americans), a blasphemy in the country of legend Johan Cruyff. But she certainly scored one of the finest goals of the competition on Depay’s achievement. “We played much better today. There is a lot of criticism in the country, but we showed the quality of our system,” retorted Dumfries after the game.

Argentina in the program in the quarter-finals?

“In 2014 it was exactly the same thing [the critics], it was very negative. Same today, still the same story, so I’m used to it and I think my players are used to it too. will continue quietly on the path on which we are embarked”, reacted Van Gaal in a press conference on Friday. Described as arrogant, the Dutch coach has still not lost in 19 games since taking over the squad in August 2021. He even allowed himself to make two half-time changes against the United States, while his team was leading 2-0, to spare his players. Bold, but inconsequential.

Very experienced, Van Gaal led the Netherlands to third place at the 2014 World Cup. The coach, who is certainly living his last professional challenge, now wants to win the country’s first World Cup. On Saturday, the Dutch deserved their success, but took advantage of the American youth to win. In the quarter-finals, the task may be more difficult, with Argentina as a potential opponent.