Jostled, the France team eliminated England in the quarter-finals of the World Cup on Saturday (2-1) and will face Morocco in the last four. 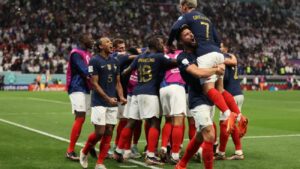 For the first time since the start of the World Cup, the grayness took hold of Doha and the blue sky disappeared from the Qatari capital on Saturday, December 10.

Some would have seen it as a bad omen for the Blues, but the latter dismissed the doubts, not without difficulty, by winning their quarter-final against England at the Al-Bayt stadium thanks to goals from Aurélien Tchouameni (17th ) and Olivier Giroud (78th). For a place in the final, the France team will face Morocco on Wednesday, author of a feat against Portugal earlier in the day (1-0).

The Franco-British rivalry, omnipresent in rugby but almost non-existent in football, may have had its very first episode far from London and Paris, 50 kilometers north of Doha. Because the scenario of the match confirmed the impression experienced for two days during the quarter-finals: this World Cup offers crazy sensations at all times. Four years after their success in Moscow, it was after a rollercoaster of emotions that the Blues offered themselves the right to dream of retaining their title.

When thinking back to this match in ten, twenty or thirty years, it will be necessary to remember that the France team was dominated in the great widths by an uninhibited England team. It will also be necessary to remember this stupid mistake in the surface of Theo Hernandez, only two minutes after the goal scored by an Olivier Giroud who therefore never gives up on a field (78th). Even in this match where he was martyred by the English defense, he managed to extricate himself from the marking of Harry Maguire to go and place his head.

At 2-1, the 4,000 French supporters present in the stands of Al-Bayt did not have time to sing for long. The fault, therefore, with this penalty offered by Theo Hernandez. Already author of the equalizing goal in this exercise at the start of the second period (54th), Harry Kane then presented himself a second time against his friend from Tottenham, Hugo Lloris. On the first, the French goalkeeper was caught on the wrong foot. On the second, the English captain failed, sending his ball wide into the stands with an unfortunate English kop (84th).

France has still not conceded a goal in the game since the 9th minute of the first match against Australia (4-1) in this World Cup. And despite the penalty conceded, she will have to thank Hugo Lloris, author of several decisive stops. First in front of Harry Kane (22nd, 29th) then against Jude Bellingham (47th). The captain, as boss, reassured in the last minutes, taking the time. Faced with the void of elimination in a World Cup quarter-final, experienced players puffed out their chests, talked to their younger, inexperienced teammates.

Raphaël Varane was there, Antoine Griezmann also with two assists for Olivier Giroud, elected man of the match despite a frustrating attempt a minute before his goal (77th). Kylian Mbappe, he did not have much to put in his mouth. The English plan to counter the number 10 has, it must be granted to Gareth Southgate and his staff, worked rather well. We then wondered how to get rid of this Mbappe addiction if the Parisian player was in a “day without”.

Aurelien Tchouameni, author of the fault on the first penalty from Harry Kane, delivered a first slamming response after the quarter of an hour of play: a distant, sudden strike, to deceive Jordan Pickford (17th). Then the Blues confirmed that they can rely on other weapons: Olivier Giroud and Antoine Griezmann obviously, but also and above all constant solidarity and a coach made for winning, and who knows how to pass this on to his players. .

The victory will not extinguish some doubts, because Ousmane Dembele no longer finds his legs from the match against Denmark, Theo Hernandez did not reassure and France had their worst period in this World Cup after the break. Tonight, there is a certain miracle in seeing the Blues join the last four. And Marcus Rashford’s free kick at the end of the match, passed just above the skylight of Hugo Lloris, confirmed this impression (90 + 10th). The “DD pussy” may be definitely back.

There was also an air of the final before the hour in Al-Khor on Saturday evening and it felt at the final whistle, at the celebration of the players but also of Didier Deschamps, embraced by all his staff. The Blues can still believe in the feat of retaining their title of world champion. For that, it will be necessary to get rid of a Morocco decidedly tougher than expected. In Doha, the grayness can disappear. The sky is blue again and will remain so for a few more days.