The Brazilian player published a long message on Saturday on Instagram, to confide his distress after the defeat of his team in the quarter-finals against Croatia. 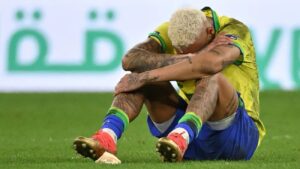 Neymar, collapsed, after the defeat against Croatia, in the quarter-finals of the 2022 World Cup, Friday, December 9. (NELSON ALMEIDA / AFP)

“I’m psychologically destroyed. It’s probably the defeat that hurt me the most.” In a message posted

on Instagram, Neymar spoke at length on Saturday December 10 about his feelings after the defeat of the Brazilian team in the quarter-finals against Croatia (1-1, 2-4 tab). The number 10 said he was paralyzed “for ten minutes after the match”: “After which I burst into tears without being able to stop. It will hurt for a very long time, unfortunately”, wrote the star of Paris SG .

The player, who had given the advantage to Brazil with a magnificent goal in extra time (105th + 1) before the equalizer in extremis from Petkovic (117th), returned in his Instagram post to the course of the meeting. “We fought until the end, I’m proud of my partners because there was no shortage of commitment and dedication. This group deserved (to go further), we deserved it, Brazil deserved it. .. But it was not God’s will.” The player thanked his supporters for the tokens of support received after the elimination. “Feeling everyone’s affection on the pitch was worth every sacrifice.”

The support of King Pele

A few hours before the publication of this writing, Neymar had received praise from Brazilian legend Pele, whom he joined on Friday as the top scorer in the history of the Seleçao (77 goals). “I saw you grow, I encouraged you every day and finally I can congratulate you for having equaled my number of goals with the Brazilian selection”, wrote the 82-year-old former striker on Instagram, from the hospital where he was admitted at the end of November.

“Unfortunately, today is not the happiest day for us. But you will always be an inspiration (…). My record was set almost 50 years ago, and no one could beat it. ‘come so far. You’ve made it, boy,” praised the Brazilian football icon, who hopes to see Neymar continue to shine on the pitch: “Your legacy is not about to end . Keep inspiring us.” A hope shared by the 2002 Brazilian world champion Kaka, who reacted to Neymar’s message. “You will heal and we will continue to enjoy your talent,” assured the former footballer.

Friday, after the meeting, the Brazilian striker said he did not guarantee 100% that he would return to play for the Seleçao. In October 2021, he had already claimed that the World Cup in Qatar would be his last World Cup, because he did not know if he would have “the mental strength to continue playing football”.

“Provocation”, “pride” … PSG supporters divided on a possible presentation of the World Cup...