A few minutes after the final whistle, thousands of Moroccan supporters flooded the Champs-Elysees to celebrate the historic qualification of the Atlas Lions in the semi-finals of the World Cup. 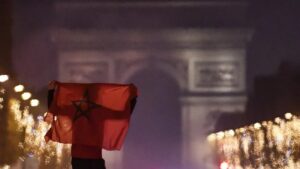 “In two weeks, I came to the Champs-Elysees more times than in a year.” Wrapped in a Moroccan flag, sitting in a parking lot entrance at the top of the avenue, Ethan is jubilant.

At 23, he and his friends came from Aubervilliers for this historic day: “I was already there after the victories against Canada, Belgium and Spain, but tonight is exceptional.” Around the young man, the atmosphere is indeed extraordinary. The jubilation of the Moroccan people makes us forget the low degree that hovers at the start of the Parisian evening.

As far as the eye can see, Moroccan flags float between smoke bombs and fireworks that steal the show from the Christmas lights. On this December 10, the most beautiful avenue in the world has rarely lived up to its name so well: thousands of Moroccan supporters stroll along the sidewalks. Songs burst forth from all sides, from the national anthem to “viva Maroc” and various tunes to the glory of the Atlas Lions. Everywhere, we embrace, we jubilate, we cry, we shout.

An atmosphere rarely seen on the Champs

“I want to thank the players, the staff, the Moroccan public: everyone gave their all. The coach took the team three months before the World Cup and took us to the semi-finals, it’s incredible”, gloats Wahid, perched on a red light, a smoke bomb in one hand, the flag in the other. “The Moroccan public is extraordinary, we can really be very proud. No one was expecting us, and we’re here. I’m not afraid of anyone now (laughs).”

On the wide sidewalks of the avenue, you have to be patient to move around. The 1,220 police officers deployed in the afternoon crisscrossed the area and prevented the crowd from overflowing onto the road. “It’s a bit of a shame, but we won’t be prevented from celebrating”, positive Wahid. A few meters away, the Place de l’Etoile metro entrance pours in hundreds of supporters continuously, from all over Paris. Patricia, a Maltese tourist, seems lost by the scene. We explain to her and she decides to turn back to come tomorrow. Her husband insists on going to see the show.

“We may never see Paris like this again, we have to take advantage,” slips Nadima, who came from Lille to visit the capital with her daughter. She continues: “We changed the program. We watched the game at the hotel and we couldn’t miss this party. It’s so beautiful…”, is moved by the Northerner. The drums resound, the songs do not stop, any more than the horns of the scooters and cars parading on the Champs, with the compulsory wearing of the Moroccan flag. With theirs, more than four meters long, Mohamed and his friends do not go unnoticed. “We come from Chartres, we had confidence in our Lions, so we came to Paris this morning.”

“We are so happy, you can’t imagine. It’s rare to experience that. Thank you to our Lions! We represent Africa, the Arab countries, and we see there that there are plenty of French people who are doing the party with us!”

A quick look around is enough to prove Mohamed right. Among the Moroccan flags, many Tunisian, Algerian, Palestinian flags… A little behind the crowd, Nima, 38, poses in front of the Arc de Triomphe. “We don’t believe it, even seeing all that! We have to pinch ourselves!” smiled the young woman, before rushing into the metro: “Yes, we’re going back to our bar to see the Blues match , because we are fully behind them too. And there would be nothing better than a Morocco-France semi-final now.”

A poster unanimously desired by the Moroccan supporters interviewed on the Champs. But for now, it’s still party time. “Too bad for the Blues match, we love them, but we’re going to stay here partying all night”, smiles Younes, “hoping that the tricolor flags will join us soon”.

World Cup 2022: Neymar says he is “psychologically destroyed” after the elimination of Brazil