The second day of the Champions Cup and Challenge Cup continued on Saturday. 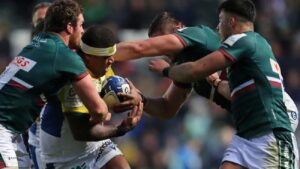 The Bordelo-Beglais fell (16-19) on Friday evening against the Sharks at the start of the Champions Cup day. If Toulon made short work of Bath in the Challenge Cup,Castres Olympic conceded another defeat by losing (31-20) against Edinburgh, in the Champions Cup. Clermont and LOU also fell against the English of Leicester (23-16) and Saracens (28-20).

The opposite destinies: the defensive bonus for Clermont against Leicester, the LOU trapped at the end of the match

The duel between Leicester and Clermont was a match that promised the winner to already take a serious option on qualifying for the Champions Cup. It was finally in the hands of the Leicester Tigers that she fell. Embarrassed by the defense of the English champions, well deployed across the width, the Clermontois had no trouble playing the game, their initiatives were only rewarded at the very end of the game: their number 9, Sebastien Bezy escaped after a scrum (79th) to plant ASM’s only converted try. Enough to snatch, in the very last seconds, a potentially valuable defensive bonus point in the race for qualification (16-23).

If a certain relief must have accompanied the last Clermont action, the Lyonnais must still be biting their fingers. The 16th penalty was too many. Xavier Garbajosa’s players had the bad idea of being sanctioned one last time at the very end of the game. A kick from Saracens full-back Elliot Daly nearly 50 meters from the posts to bring the final score to 28-20 and here is the LOU deprived of the defensive bonus temporarily hard won after a catastrophic start to the match (0-15, 20th). The Rhodaniens, champions of the Challenge Cup last season, suffer a second consecutive defeat, and see their future among the greats of Europe already threatened.

The curse: punished by Edinburgh, Castres still fanny in Europe

The CO staff had only kept two players from the disappointment conceded for their entry into the competition against Exeter (12-27, 4 tries to 0) last weekend. The change of formula was not enough to allow the too undisciplined Tarnais (21 fouls, 1 yellow card) to get their first point in the Champions Cup. If they have not been undeserved, notably by scoring three tries (Colonna 15th, White 30th, Seguret 68th), Julien Dumora’s teammates have always chased after the score. By falling 31-20 in Scotland this Saturday, the Castres have almost no hope of qualifying. Above all, the Tarnais have not won in Europe since January 2019.