After being weakened by a virus, Kingsley Coman, Ibrahima Konate and Raphael Varane all took part in the training session on Saturday, on the eve of the final against Argentina. 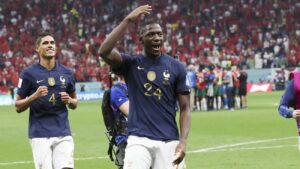 for the France team on Saturday, took part in the session on the eve of the World Cup final against Argentina, Saturday December 17, on the lawn of the Jassim bin Hamad stadium in Doha. During the fifteen minutes open to the media, we could see that the 24 players of the France team responded well.

For the rest, the main fear has therefore been evacuated: no other player has been affected by the viral syndrome which has been circulating for several days within the France team. This virus had prevented Adrien Rabiot, Dayot Upamecano and Coman from participating in the semi-final against Morocco (2-0) on Wednesday. Weakened in turn, Raphael Varane and Ibrahima Konate had not trained on Friday but participated well at the start of the session on Saturday. Theo Hernandez and Aurelien Tchouameni, also spared yesterday for minor bruises, also responded.

This morning, during the press conference on the eve of the match, Hugo Lloris and Didier Deschamps had assured that they had not heard from the other players, after leaving the Blues base camp early, located at the Al-Messila hotel. . “I don’t want to go into details. We make sure to take as many precautions as possible, to adapt and to deal with it without going overboard, neither on one side nor on the other,” said replied the coach, referring to the current situation within the group.

With the return of Varane and Konate, the doubts surrounding the Blues’ defense for the final could be dispelled. Coman’s presence is also reassuring, as the Bayern Munich winger had missed the Blues’ last two training sessions. If the virus does not affect any other player by tomorrow, 4 p.m., it is with a full group that the French team will be able to present themselves for the long-awaited meeting, in the final against Argentina.