During the 2022 World Cup trophy presentation, the Emir of Qatar wrapped Lionel Messi’s shoulders in a traditional garment before the Argentine lifted the trophy. 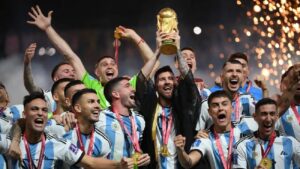 Surrounded by his teammates, Lionel Messi, captain of the Argentina team and dressed in a bisht, carries the World Cup after the victory against the French football team, December 18, 2022. (AFP )

An unexpected symbol Sunday, December 18, after beating France in an anthology match in the final of the 2022 World Cup, Lionel Messi steps forward on the ceremonial podium and collects his medal.

The captain of Argentina then covers himself with an unusual garment for a trophy presentation. The Emir of Qatar, Tamim Ben Hamad Al-Thani, puts on a transparent black cape. The seven-time Golden Ball lifts the World Cup with this dark suit which contrasts with the sky and white jerseys of its partners.

If the world champion seemed taken aback to wear this cape, it is a tradition in the emirate. It is a bisht, an outfit often black but sometimes brown or beige worn in celebratory moments such as weddings usually by men in the countries of the Arabian Peninsula.

Symbol of respect and soft power

A synonym of wealth and success which is also worn by the royal family. And not only in Qatar, the Crown Prince of Saudi Arabia Mohammed bin Salman never leaves his own, reports BFMTV in particular. The significance would be historical, Arab warriors wore it after a victory. It is therefore as a sign of respect that the Emir of Qatar presented the bisht signifying to Messi that he is a warrior who won for his country Argentina.

But beyond the symbol this garment is a political act on the part of Qatar. From soft-power through sport, the photo of Lionel Messi lifting the World Cup with his bisht will remain inseparable from the emirate. “Qatar want this to be their moment as much as that of Messi and Argentina,” analyzes the New York Times.

The symbol did not appeal to everyone, however. Many internet users believe that the moment is spoiled by this outfit because Lionel Messi’s Argentina jersey is less visible. On the BBC set, former Albiceleste player Pablo Zabaleta complained: “But why? Just, why? There was no reason to do that.”

“I found it strange that Leo Messi did not lift this cup with the Argentina shirt. For posterity, I find it a bit surprising this traditional outfit that hides the number 10 of the Argentine shirt for millions of people in across the planet.”

If in the last World Cups, the players lift the trophy dressed simply in their jersey, it is not the first time that a traditional outfit or accessory is embedded at the end of a World Cup. In 1970 in Mexico, King Pele sported a magnificent sombrero to celebrate Brazil’s third World Cup.