After a few days off following Argentina’s world championship title, Lionel Messi has resumed training at PSG. Should he present his world trophy to Paris Saint-Germain supporters? The question divides. 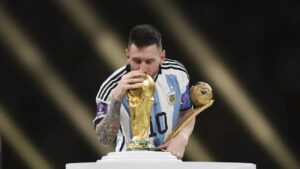 The question has been agitating the alleys of the Parc des Princes, the lair of PSG, in recent days. Should Lionel Messi present the World Cup to the Parisian public?

After two weeks of celebrations of his coronation of world champion, Lionel Messi resumes, Wednesday, January 4, the way to the Camp des Loges, the training center of Paris-Saint-Germain.

The day before, the Argentine star returned to the capital but no one knows if the Parisian striker brought back the world trophy in his luggage. Some PSG supporters do not want to see the seven-time Golden Ball present the world title at the Parc des Princes. “It’s out of the question, gets carried away by a young supporter. His trophy, it belongs to his country, you don’t bring him back to France. He still plays at PSG, it would be frowned upon, it’s even provocative!”

Stephane, another Parisian supporter, also shares this opinion. He still has between the throats, the many polemical celebrations of the Argentine clan after his victory in the final of the World Cup. “We could see them making fun of our players, especially on the bus with a photo of Mbappe, it may be taken badly by the fans that he comes and presents the World Cup.”

No announcement from management about a possible celebration

But among PSG supporters, there is a real split. For many, Lionel Messi deserves a real celebration for his title of world champion. “It’s a pride, he has the right to celebrate it with our club, supports a supporter. Despite the fact that he wins it against France, it’s the trophy of his career. I think he must present at the Princes Park.”

For Guillaume, PSG scarf around his neck, the club must make a gesture for the Argentine striker but also for Kylian Mbappe, the other Parisian star. “We must pay tribute to Kylian given how he carried the Blues during this cup and how he carries us to PSG. He also deserves a small ceremony.”

No celebration is currently planned by the management of PSG. The next match at the Parc des Princes takes place on Wednesday January 11 for the reception of Angers in Ligue 1.

World Cup 2022: Konate, Varane and Coman back in training, the full group on...

World Cup 2022: an uninhibited Tunisia, a Denmark without an idea … What to...