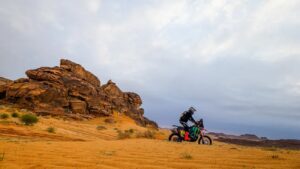 On Spanish time. Registered at the last minute for this Dakar 2023, Joan Barreda Bort won the fourth stage at the start and finish in Ha’il (Saudi Arabia), Wednesday January 4th.

The Iberian biker (Monster Energy JB Team), nicknamed “Bang Bang”, completed the 574 kilometers (including 425 km of special) in 4h28’18”, ahead of the Chilean Pablo Quintanilla (Monster Energy Honda Team), at 16″, and the American Skyler Howes (Husqvarna), at 1’05”.

The bad operation of the day is to the credit of Mason Klein (Bas World KTM), who had to stop in the home straight because of a fuel supply problem, while he had done a long time the race in the lead. Arriving in Ha’il more than 12 minutes behind Joan Barreda, the American is relegated to 6th place overall, 10’05”.