The nine-time WRC world champion finished the special 13 seconds ahead of his French counterpart on Wednesday. 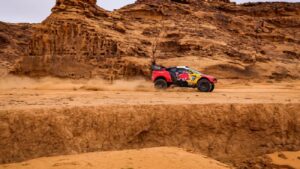 First victory for Sebastien Loeb in this Dakar 2023. Unlucky since the start of the mythical rally-raid, the Frenchman (BRX)

won the fourth stage, Wednesday January 4, a loop of 573 kilometers (including 425km of special) around Ha ‘il (Saudi Arabia). The nine-time world rally champion finished ahead of his compatriot Stephane Peterhansel (Audi), at 13″, and the Spaniard Carlos Sainz (Audi), at 1’50”, according to a provisional classification.

Fourth at 2’06”, on Wednesday, the Qatari Nasser Al-Attiyah (Toyota) maintains his comfortable lead in the general classification. Behind the title holder of the 2022 edition, the Saudi Yazeed Al Rahji (Overdrive, at 18’18” ) and Stephane Peterhansel (at 18’52”), are in a pocket handkerchief. Carlos Sainz is at the foot of the podium, at 32’55”. Despite his stage victory, Sebastien Loeb remains 14th at 1h33’43” behind Nasser Al-Attiyah, and will probably not win the Dakar, for his seventh participation.