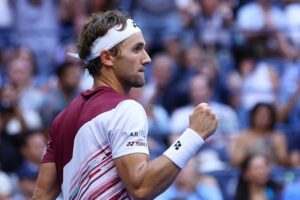 Casper   Ruud is in the final of the US Open.(Reuters)

After that against Rafael Nadal at Roland-Garros, Casper Ruud will therefore play a second Grand Slam final of the season, thanks to his victory over Karen Khachanov in four sets (7-6 [5], 6-2, 5- 7, 6-2).

And it is only fair to find him in the last match of this US Open 2022 as the Norwegian has shown solidity. He proved that he had become a dangerous player on surfaces other than clay.

Facing Karen Khachanov, he struggled to get into the rhythm. It must be said that the stakes are difficult to ignore: qualification for the final, the possibility of putting your name on the list of winners of a Major, but also the place of world No. 1 in the event of a final victory (or if Alcaraz does not did not reach the final).

At the start of the game, the Russian remained on a level close to that which had allowed him to dismiss Pablo Carreno Busta and Nick Kyrgios, while Ruud was struggling despite shots that were already going well. The Norwegian’s tactic was clear: move Khachanov wide to prevent him from exploiting his power. But he made too many mistakes and Khachanov stayed in the game. Nervous, the two men exchanged breaks without being able to detach themselves. We had to wait for the tie-break to see Ruud really break away and conclude after a superb set point of 55 shots.

Ruud flies over the second set

Released, the seeded No. 5 took advantage of a clear boost from Khachanov to fly over the second round (30 winning shots against only 11). Above all, he won the point every time his first ball passed.

Against all expectations, the level was balanced between the two men in the third set. Visibly nervous, Ruud couldn’t kill the match. For his part, Khachanov was essentially holding on thanks to his first ball. Ruud was going to crack in the last game, giving the set to Khachanov on the only break of the set.

Was the game restarted? No. Ruud immediately put the pressure back on his opponent who had to save two break points from his first service game. But Ruud had regained his solidity. His angles again hurt a Khachanov who no longer had the legs to fetch all the balls. A forehand at the end of the race gave Ruud the break (2-1). A double break (4-1) gave him the safety cushion that allowed him to finish the match in complete serenity.

He will face in the final the winner of the match between Carlos Alcaraz (who is also aiming for a first Major title as well as the first place in the world) and Frances Tiafoe.

Dybala double against Monza leads Roma to the top of Inter, while Inter beat Cremonese