If the Atlas Lions will take African football higher than ever in Qatar, they are not the first to have made the continent shine in the World Cup. 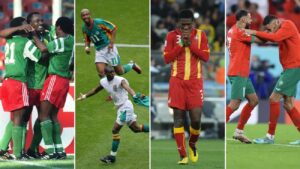 A match for history and a qualification bigger than football.

This is what Morocco achieved on Saturday, December 10, by eliminating Portugal in the quarter-finals of the World Cup. Because this resounding success is a small surprise against a team accustomed to international summits. But also because it breaks down a barrier for the whole of Africa. Never has a selection from the continent climbed into the last four of a World Cup. These Atlas Lions are pioneers. And they follow the path set by three other selections before them.

Cameroon 1990: Milla and the others, forever the first

Before the Moroccans, other Lions had dug the furrow for all of Africa. The Cameroonian Indomitable Lions were the first to reach the quarter-finals of a World Cup, at the World Cup in Italy in 1990. With the historic Roger Milla as a guide, despite his 38 years and a role of luxury substitute ( four goals all the same), Cameroon had already come close to reaching the semi-finals. Against England, Cameroon lead until the 83rd minute and a penalty from Gary Lineker. The English serial scorer will shatter the Cameroonian dream by scoring the winning goal in overtime (3-2).

Frustrating for those who had started their World Cup by dominating the Argentinian world champion in chickens. But also incredibly promising for all of Africa, which then awakens to the upper echelons of world football. “This victory against Colombia shows the whole world that these little Africans, there, who are used to being ridiculous, from today, they will have to be taken seriously” prophesied Andre Kana-Biyik after the success of his team in the round of 16. 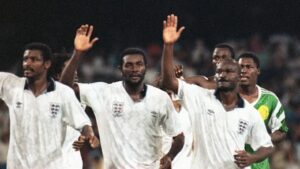 Cameroon national team players (left to right, Omam Biyick, Stephen Tataw and Roger Milla) greet the crowd after their cruel 1990 World Cup quarter-final elimination against England, some of whom wear the jersey after the match. ( AFP)

As a discovery of the World Cup, the Lions of Teranga have the right to the gratin as soon as they enter: to face the French team, world champion and European champion. But the Senegalese are far, very far from even having complexes. With a tricolor coach, Bruno Metsu and many players who play or have played in the First Division, they sign one of the most improbable blows in the history of the competition (1-0). “It’s quite funny, President Abdoulaye Wade said this sentence: ‘We beat France, we are the world champions'”, defender Alassane Ndour recalled to TV5 Monde.

And their beautiful journey does not stop there. Second in their group, they discover the final stages and the golden goal, which then concludes the extension. This very ephemeral rule in the annals of football smiled on them against Sweden in the round of 16 (2-1 a.p.). Turkey will be more cruel in the next round by winning at the start of extra time. 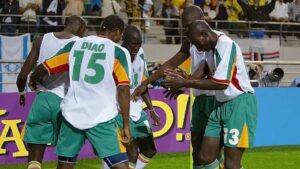 Ghana 2010: one penalty away from glory

If there were to be a bounty on which African team came closest to achieving what Morocco achieved, Ghana would win. And hands down, in spite of himself. The Black Stars reach the quarter-finals in South Africa, for a first on African soil. Qualified in extremis in chickens, they dismiss the United States in the round of 16 (2-1, a.p.).

Uruguay comes in the quarters, suffers, but holds until extra time. In the stoppages of the game, the fate changes. Luis Suarez turns into a service keeper and takes out an assured goal with a rough hand. Asamoah Gyan has qualification at the end of his foot. “I think everyone on our side was like ‘yes, we’re going to the semi-finals’ because he had already scored two penalties before and made it look easy. recalled Hans Sarpei to BBC Africa in 2020. I was standing there and for me the ball was going into the net and we were going through to the next round.” Gyan’s third penalty crashes heavily into the crossbar. Luis Suarez’s sacrifice becomes an absolute heartbreaker. Because Uruguay ends up winning 4-2 on penalties. 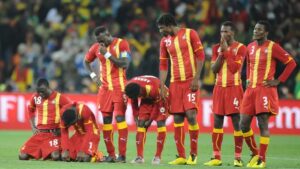 The 2018 semi-finalist, Belgium. The 2010 world champion, Spain. The 2016 European champion, Portugal. And even a draw against the finalist of the last edition, Croatia, also in the last four in Qatar. Morocco is definitely the executioner of European football during this 2022 World Cup. This list of victims traces the formidable journey of Moroccans, the first to take Africa to the semi-finals of the World Cup.

With an almost unshakeable rearguard (only one goal conceded, moreover against his camp), a constant combativeness and artists to lead his offensives, the Maghreb selection is the most beautiful surprise of this opus. 2022. “We had to change mentalities, get rid of this feeling of inferiority, relishes goalkeeper Yassine Bounou. The generations to come will know that Morocco can work miracles.” And the latter may not have finished his work of undermining the Old Continent. In the semi-finals, France or England will face the Atlas Lions. The perfect opportunity to break a new ceiling for the whole of Africa. 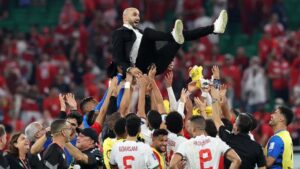 Moroccan coach Walid Regragui carried by his players after Morocco qualified for the round of 16 of the World Cup, December 2, 2022. (AFP)

World Cup 2022: an uninhibited Tunisia, a Denmark without an idea … What to remember from the match between the two future opponents of...

World Cup 2022: three things to know about Australia, the first opponent of the...